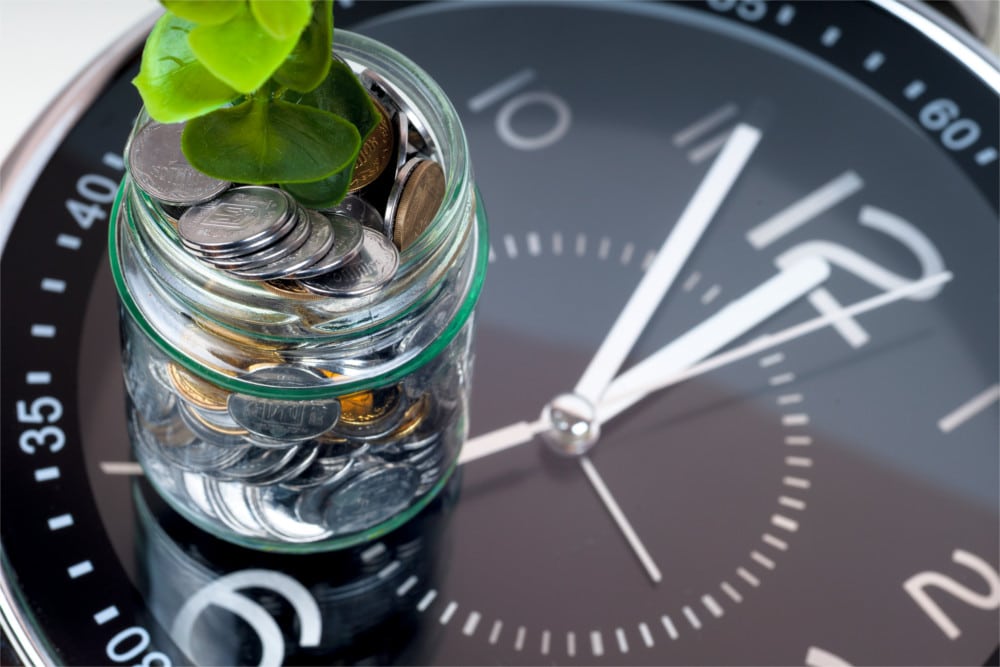 The “Time Value of Money” is one of the most important concepts in economics, investing, and business. For individuals, this determines how much you save and spend. For businesses, it determines how quickly they try to expand. For investors, it decides the mix of a portfolio.

What is the Time Value of Money?

“Time is money” – this can be more literal than you think. Basically, having $5 in your pocket today is worth more than getting $5 tomorrow. Over one day that value difference might not mean much, but as the length of time increases, so does the value of time.

For example, imagine a friend asks to borrow $100. If they return it tomorrow, you would probably not ask for any interest – knowing you helped out a friend is greater than the time value of $100 for one day. If the friend cannot pay it back for a month, then the time value is greater – you might ask for an extra $5 for the loss of your cash for that time. The exact time value of money is determined by two factors: Opportunity Cost, and Interest Rates. 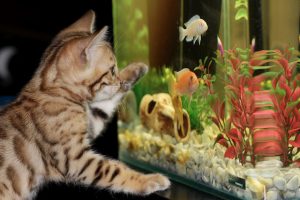 Whenever you buy something, the “dollar cost” is the actual money you spent on the purchase, but you lose more than just money when you spend it. You also lose the potential to spend that money on something else – this is what is known as the “Opportunity Cost”.

Imagine you want to take a trip to Japan. You save up $2,000 to have an awesome trip that you will remember forever, and are preparing to buy the plane ticket. Unfortunately, you get distracted while looking up airfare, and instead watch cat videos for the next 6 hours. During one of the videos, you see an adorable Bengal Kitten, and immediately fall in love – you absolutely must adopt one! You look up local kitten breeders, and see that getting yourself a cuddly spotted Bengal kitten will cost….

$2000 (including all the pet food and supplies you’ll need).

Opportunity Cost and the Time Value of Money

At this point, you have a choice – go back to booking your trip to Japan, or contacting the breeder to buy a kitten. Either way you will spend the $2000, but choosing one also means giving up the opportunity to have the other. This is the root of Opportunity Cost – doing one thing will always close the door on doing a bunch of other things (at least at the same time).

This is where the time value of money comes in. With our first example, you were faced with lending your friend $100. Even if he or she pays you back quickly, you still lose the ability to use that $100 for yourself until they do. 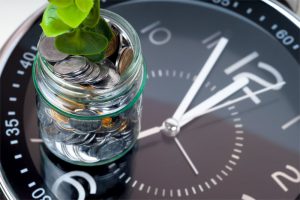 Your own personal time value of money is what determines how much you spend and save. This is the Japan versus Kitten problem that you face every day: whatever you spend today, you cannot save up for a bigger (and potentially better) purchase in the future.

This has some really interesting impacts on your every-day life. People who have a very low Time Value of Money have a very easy time saving – whether they get something today or tomorrow does not make a very big difference, so it is easier to put off purchases. Every time a purchase is put off for later, it means there is a little bit more money in their bank account today – putting off enough purchases for long enough means a fat bank account, and the ability to buy something really big. If you know someone who seems to effortlessly save money, this is the reason why!

On the other hand, people with very high time values of money have a much harder time saving. They know that if they spend the weekends at home watching old movies will mean more money in the bank later for something really big and cool, but it is harder to sacrifice going out with friends or buying smaller things today. Most people have higher Time Values of Money – which is why it is important to use dedicated savings strategies and goals to build wealth before you get the chance to spend it!

Time Value of Money and Business

Businesses face the same balance every day – managers, executives, and employees all have their own ideas about what can be the next-biggest way to generate a profit, but there are only so many resources to go around. The “time value of money” becomes even more important, because being the first company to offer a new product will give a huge advantage in the marketplace. 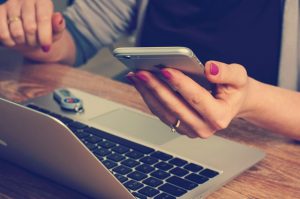 Apple ( AAPL) and Microsoft ( MSFT) are some of the biggest corporate rivals in the world – every investment decision they make takes the other’s potential moves into consideration. In 2010, Apple was fresh off releasing the first generation of the iPhone – they were hitting about 4% of the total cell phone market, but earning about 50% of all the profits in the cell phone space.

At the same time, Microsoft had just released Windows 7, and was trying to repair its reputation after the previous version (Windows Vista) was very poorly received. Both of these companies were faced with huge potential risks and rewards:

They could not have it both ways – both companies needed to choose the main focus of their business over the next few years, which would lose them the potential profits of going in the other direction. 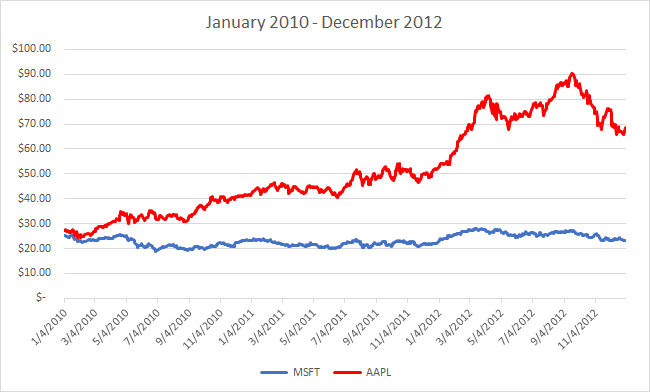 However, in the 4 years since, fortunes have reversed. Apple’s market share of the smartphone market is no longer growing as it gets more competition from Samsung and Google, while Microsoft’s market share for computers continues to grow. From 2013 to 2017, Apple’s stock price rose at an impressive 161%, but Microsoft exploded by over 200%. 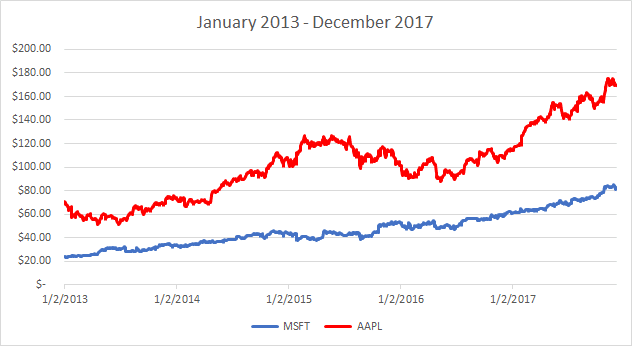 It may sound impossible to calculate your time value of money if you are trying to sum up the potential to spend your money on anything, so economists generally use interest rates as a stand-in. In fact, this is precisely how low-risk bonds are priced – the bond yield is an interest rate, paying investors to borrow their money for a specified period of time.

Supply, Demand, Interest Rates, and the Time Value of Money

Interest rates work as a way to calculate the time value of money because they are determined by the market as a whole. The US Treasury will try to sell 30-year bonds to investors – investors will buy more bonds if the interest rate is higher (so they get a higher return). The treasury wants to pay as little interest as possible, but they still need to sell a certain amount of bonds, so they need to offer the lowest interest rates that investors will take.

At the same time, investors look at the interest rate offered on a bond, and compare that against everything else they could be investing their money with for the same period. If the markets are growing, investors see a lot of other investment opportunities that could pay a high return, so they force the interest rate on bonds to go higher. If the economy is shrinking, there are fewer good potential investment opportunities, and more investors are willing to settle for bonds at lower interest rates.

Time Value of Money and Investing

The Time Value of Money is also the core concept of investing – putting your money towards future growth instead of using it for consumption today.