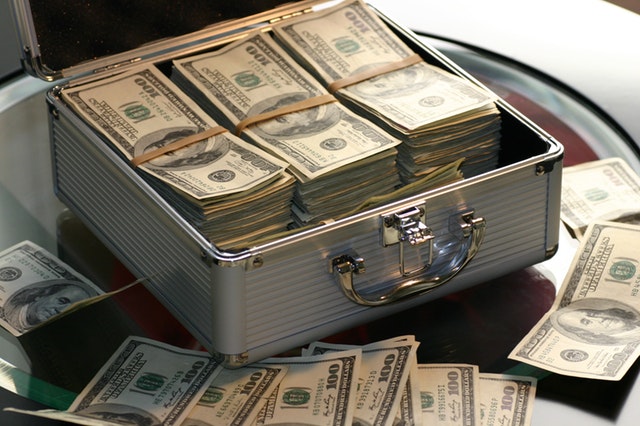 The Federal Reserve Bank, or the “Fed”, is the central banking system of the United States. It serves as the primary regulator of the US dollar, as well as the “lender of last resort” for other banks.

The Federal Reserve works to maintain the interest rates that banks use to lend money to each other – and by extension – the interest rate you would get when you take a loan out from a bank. By regulating interest rates, they work to regulate the money supply. This also gives them some control over how quickly the economy grows or shrinks, as well as inflation.

When interest rates are low, it is “cheaper” for people and businesses to borrow money, so they will borrow more. When interest rates go up, people take out fewer loans. Generally speaking, businesses borrow money when they want to hire new people or increase their production capacity (for example, building a new factory). Most new business take out loans to cover start-up costs.

Inflation is what happens when prices across the economy go up – usually prices increase by about 3% a year in the United States. One reason for this is cyclical – imagine if you are running your own business. If all of the other businesses you rely on for supplies raise their prices, you need to raise yours too because of the extra costs. If you want to give your employees a raise, either because they’re doing a great job or just because you know their cost of living has gone up due to price increases, you’ll need to pay them more too.

Because of how money is created in the United States, this also means that the money supply generally will increase when interest rates are low, and generally decreases when interest rates go up. The Fed also works to maintain a stable inflation rate to prevent prices across the economy from raising too quickly.

The Federal Reserve Bank is also the biggest economic research organization in the world, employing an army of researchers investigating everything from economic development to the effects of new currencies on our current money supply. If you want more information on some of the research from the Federal Reserve, or to access some of the economic data they collect (like GDP), you can visit the St. Louis Federal Reserve Economic Data page by Clicking Here. 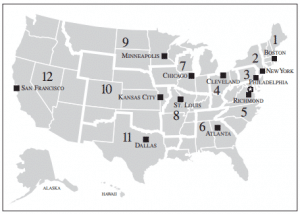 The Federal Reserve Bank is divided into 12 “Branches”, each responsible for their own territory. The branches are:

The branches are distributed according to how the nation’s economic activity looked in 1913 (when the Fed was created) – the Northeast with a greater concentration, with the plains area very spread out. Missouri is the only state to have two Fed branches, mostly due to the fact that a senator from Missouri, James A. Reed, was instrumental in getting the law that created it to pass the Senate.

Some of the branches serve special functions – for example, the Federal Open Market Committee, which determines US monetary policy, is led by the President of the Federal Reserve Bank in New York (with other Fed branches rotating on 5 other positions on the committee). 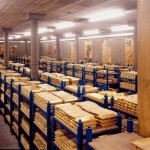 The New York Federal Reserve Bank also has the world’s largest gold storage facility. Over 95% of the gold stored here is from other countries as part of their own currency reserves, making up about 10% of all the world’s gold reserves. Countries keep the gold stored at the Federal Reserve for practical reasons – if countries need to trade gold between each other, it is easier to move it from one vault to another within the same facility than to ship it between countries.

All banks in the United States are required to have a “reserve requirement“, meaning a percentage of deposits available for withdraw and not loaned out. Banks can either keep this as cash stored in the bank vault, or (much more commonly) deposited at the Federal Reserve Bank.

If a bank does not have enough cash to satisfy its reserve requirement at the end of the day, they need to make loans from other banks, or the Federal Reserve itself, and deposit the borrowed money. This function is why the Federal Reserve Bank is sometimes called the “lender of last resort”, and the interest that is charged for these overnight loans is called the “overnight rate.”