Previous: 7-01 How to Read Stock Charts
Next: 7-03 Head and Shoulders
Uncategorized

The Cup with a Handle pattern is one of the best-known stock chart patterns. The Cup patterns follow outlines that simulate an inverted semi-circle (U-shape), indicating a price fall, a bottoming out, and a price rise. Afterwards, there tends to be a rather unstable period marked by a sell-off generated by investors who acquired the stock near its former position. This often causes a slight tick downward, forming the handle of the cup. 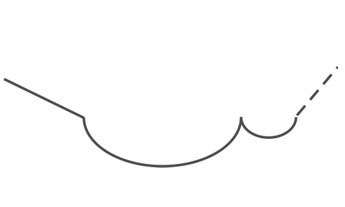 A saucer pattern forms when a security has bottomed out for a while and then starts to move upward. The flattened U-shape resembles a saucer:

The cup always precedes the handle. As the cup develops, the price pattern follows a gradual bowl shape. There should be an obvious bottom to the bowl; a v-shaped turn is not a good indicator.

The depth of the cup indicates the potential for a handle and subsequent breakout A breakout occurs when a stock’s price moves up quickly above former resistance levels. to develop. The cup should be fairly shallow.

The handle tends to be down sloping, and indicates a period of consolidation. Consolidation occurs when the price seems to bounce between an upper and lower price limit. You can track the down sloping angle of the handle by drawing trendlines across the upper and lower price limits. If the price ascends outside of the trendlines, then it has the potential for breakout. If the price ascends beyond the upper, right side of the cup, then the pattern is confirmed, particularly if it is accompanied with a sharp increase in volume.

Understandably, we investors like to buy at the lowest possible price. Ideally, we would buy at the bottom of the cup formation. However, by the time the handle formation begins to develop, investors must gauge their level of risk. There is no surefire way to predict when the lowest point will occur, and there is a possibility that the pattern will fail, and breakout in a downtrend.

Some technical analysts believe that the best time to buy is after the handle begins to ascend. According to Rick Martinelli and Barry Hyman, “buy stocks only as they break out of the cup-with-handle to new highs”. Khun suggests a more aggressive method of buying stocks. He suggests that “experienced traders can buy in increments in anticipation of a breakout, but it’s tricky.”

The handle will often slope downwards initially, however, watch for the price to breakout beyond the price at the right side of the cup. The depth of the cup from the right side is an indicator for the potential price increase. However, many cups fail after rising only 10% to 15%. Be sure to use stop-loss orders to limit losses or to maximize gains.