A double bottom chart will look like a “W.” It indicates that the stock hit bottom market price, had a quick – albeit brief – uptick, and decreased again to turn a “V” shape into a “W.” The two reverse peaks should be around the same floor price and the time period should be similar to create the fairly well-formed “W.”

A Double Bottom is only complete, however, when prices rise above the high end of the point that formed the second low.

Analysts vary in their specific definitions of a Double Bottom. According to some, after the first bottom is formed, a rally of at least 10% should follow. That increase is measured from high to low. This should be followed by a second bottom. The second bottom returning back to the previous low (plus or minus 3%) should be on lower volume than the first. Other analysts maintain that the rise registered between the two bottoms should be at least 20% and the lows should be spaced at least a month apart.

Look at the chart below that shows a very well defined double bottom and then the ensuing rise: 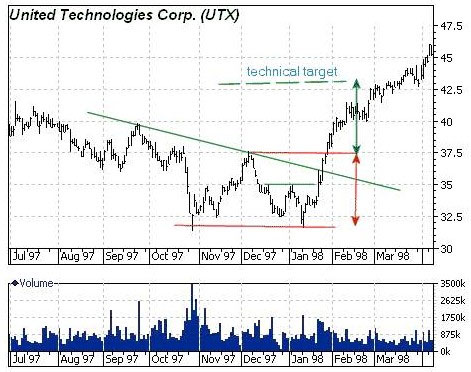