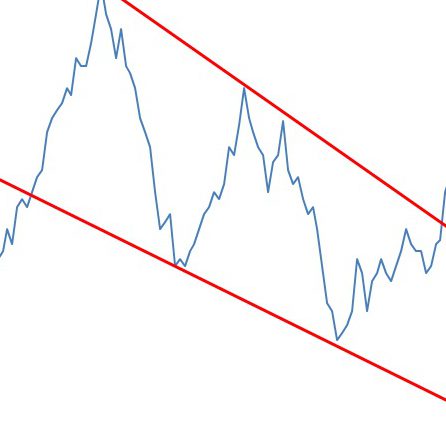 A falling wedge is a bullish reversal pattern made by two converging downward slants. To prove a falling wedge, there has to be oscillation between the two lines. Each of the lines must be touched at least twice for validation.

The pattern labels the shortness of sellers. A characteristic is by a progressive reduction of the amplitude of the waves. The highest will reach during the first correction on the support of the wedge and will form the resistance. Another wave of decrease will then happen, but with lower amplitude, thus displaying the weakness of sellers. A second wave is formulated thereafter but prices will decrease lower and lower at the contact with the resistance. Volumes will then be at their lowest and eventually decrease as the waves. The movement will have almost no selling power which displays the willingness of a bullish reversal.

The target price is presented by the highest point that results in the formation of the wedge.

Check out some statistics about the falling wedge:

The spacing between each contact point on lines is necessary, it is important otherwise it could be a pennant.

More of the trend lines are sloped, the more the upward movement will be violent.

The downward retracement is normally two times faster than the formation of the wedge.

Pullbacks are detrimental to the performance of the pattern.

The breakpoint is normally located around 65% of the length of the falling wedge.

Falling wedges which are bigger give better performance than narrow wedges.