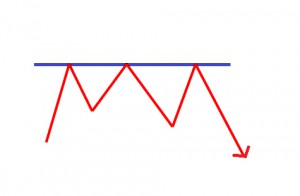 The V bottom is shaped like a V thus the name. The dip will be quite sharp. It’s because the irrationality of actors leading to a steep fall which will be corrected shortly after. The V bottom will occur most often in a downward trend and will generally  offer a signal trend reversal. It can also appear in an upward trend (like in an economic announcement).

The neckline of the pattern is formed by the uppermost point prior to the formation of the V.

Here are several criteria that are used to identify a V bottom:

– The lowest point of the V bottom is often formed by a single candle, often with a long lower shadow which underlines the reversal willingness of investors.

– The sharp downward movement that forms the V is guided by a very steep downward slant. The price will often make a pause during the bearish movement.

– It is quite difficult to anticipate a V bottom.

– The interest of the pattern is in its reversal potential.

– The V bottom often appears in a channel.

– The upward trend will continue in most cases once the pattern is completed, but in trend.