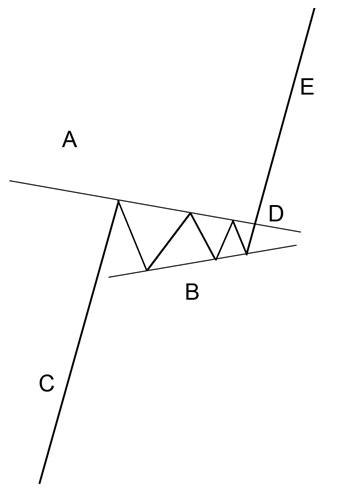 The pennant resembles the symmetrical triangle, but it’s characteristics are not the same. The pennants is shaped like a wedge of consolidation. Its normally appears after a sudden upward or downward movement. The life of a pennant is short according to the time frame used.

The pennant’s pattern is a continuation pattern. The exit side of a pennant depends on the preceded movement. The formation of the pennant may intervene in a bullish or bearish trend. This break will occur halfway of the movement.

The target calculation is compared to the prior trend. You should calculate the height of the entire movement, up or down before the formation of the pennant and then extend the high on the last low/high point of the pattern.

A graphical representation of a pennant follows:

Several statistics about the pennant are:

A pennant is more powerful if there are no false breakouts.

Pullbacks are harmful for the performance of the pennant pattern.